TIPS TO PRESENT YOUR LISTING IN ITS BEST LIGHT

At BoxBrownie.com, unfortunately, we see hundreds of photo shoots where homes have been presented poorly and agents are missing a chance to showcase the property in the best light. Having magazine-ready imagery is crucial in marketing the home effectively and gives you the greatest chance to receive the best price.

In this blog, we’ve analysed 10 images from a recently listed home where our co-founder Brad Filliponi outlines key areas to help present the property to get the best result.

This is often the first impression many potential buyers will have so it’s important to get it right. The photographer can’t be expected to move the heavy rubbish/debris that has been left on the side-access area. Luckily, it can be digitally done through our Item Removal edit.

In this case, the house has been shot facing straight-on towards the property. If the photographer had taken a few steps to the left, the buyer could see the depth of the home and get a better understanding of the scale of the property. It’s always a good idea to leave the blinds open so the house looks lived-in and inviting. Similarly, winding up the blinds on the balcony so they both align, would help show the deck in its entirety.

Sometimes images of double-storey homes can give the impression that you are staring up at the house which could be off-putting. You can minimise this by having the shot taken from the road and zooming in on the home. 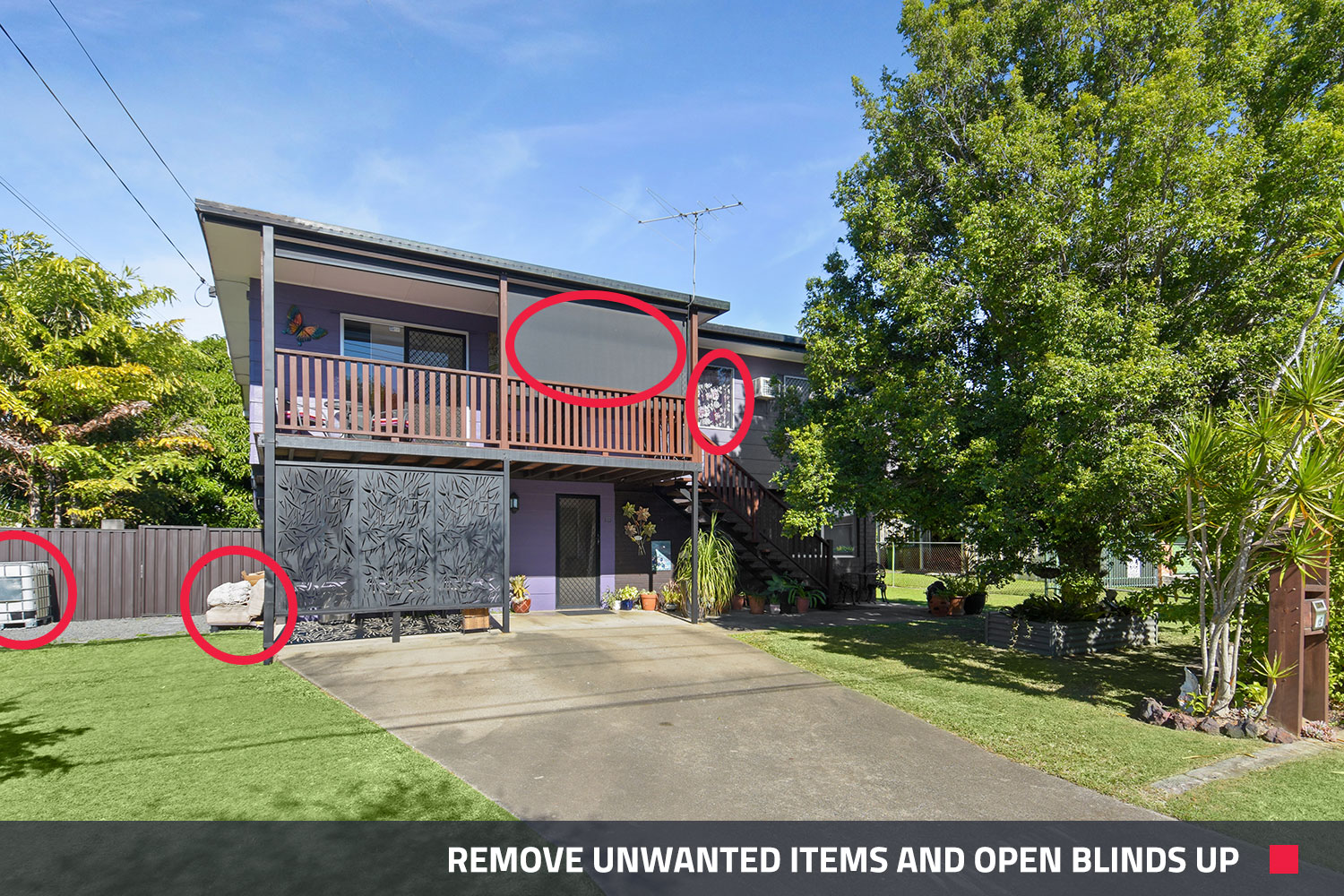 As you can see in this shot, the servery windows and French doors are open which looks great and having all the chairs straight brings a sense of calm and order to the image. We would suggest removing the mat if it is not needed and the cat accessories to tidy up the shot even further.

To better frame the image and give the potential buyer more context, we’d recommend including a little more door in the shot. There are also a few other elements that could be improved like trying to avoid corners of the drawers or tallboy while also removing the power cords and books or having them removed through our Item Removal edit.

The pillows are nice and straight and there are no creases on the doona, which is ideal in bedrooms. 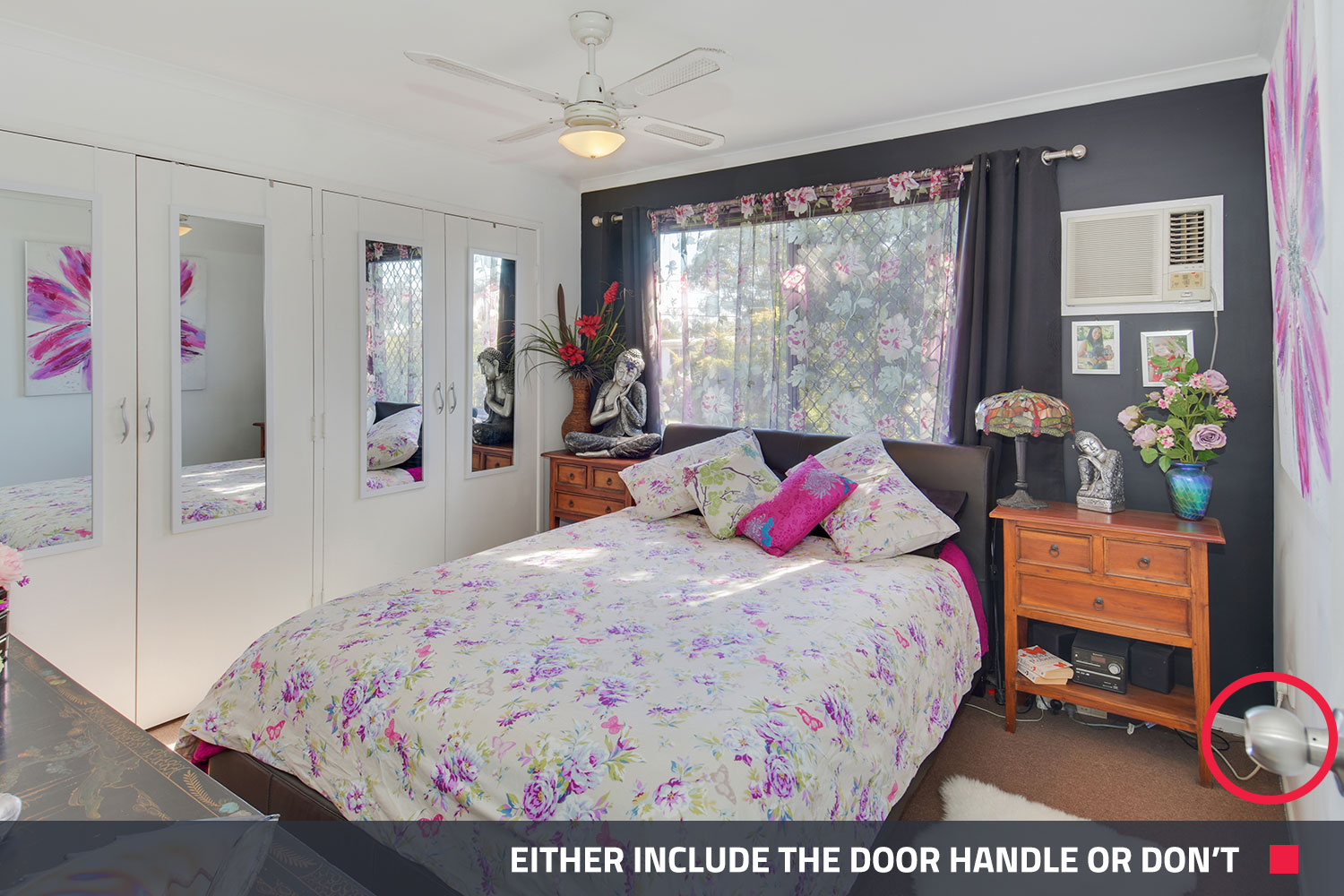 In this shot, the window is open, which is great and creates a sense of space. However, the plant, while it looks okay, is blocking the tap ware which is not ideal. Also, by removing the mat and folding the towels neatly, the feel of the room could have been improved.

The image is also taken from an angle that is too low and should have been taken at eye-level, however, the door ratio in the shot is ideal. 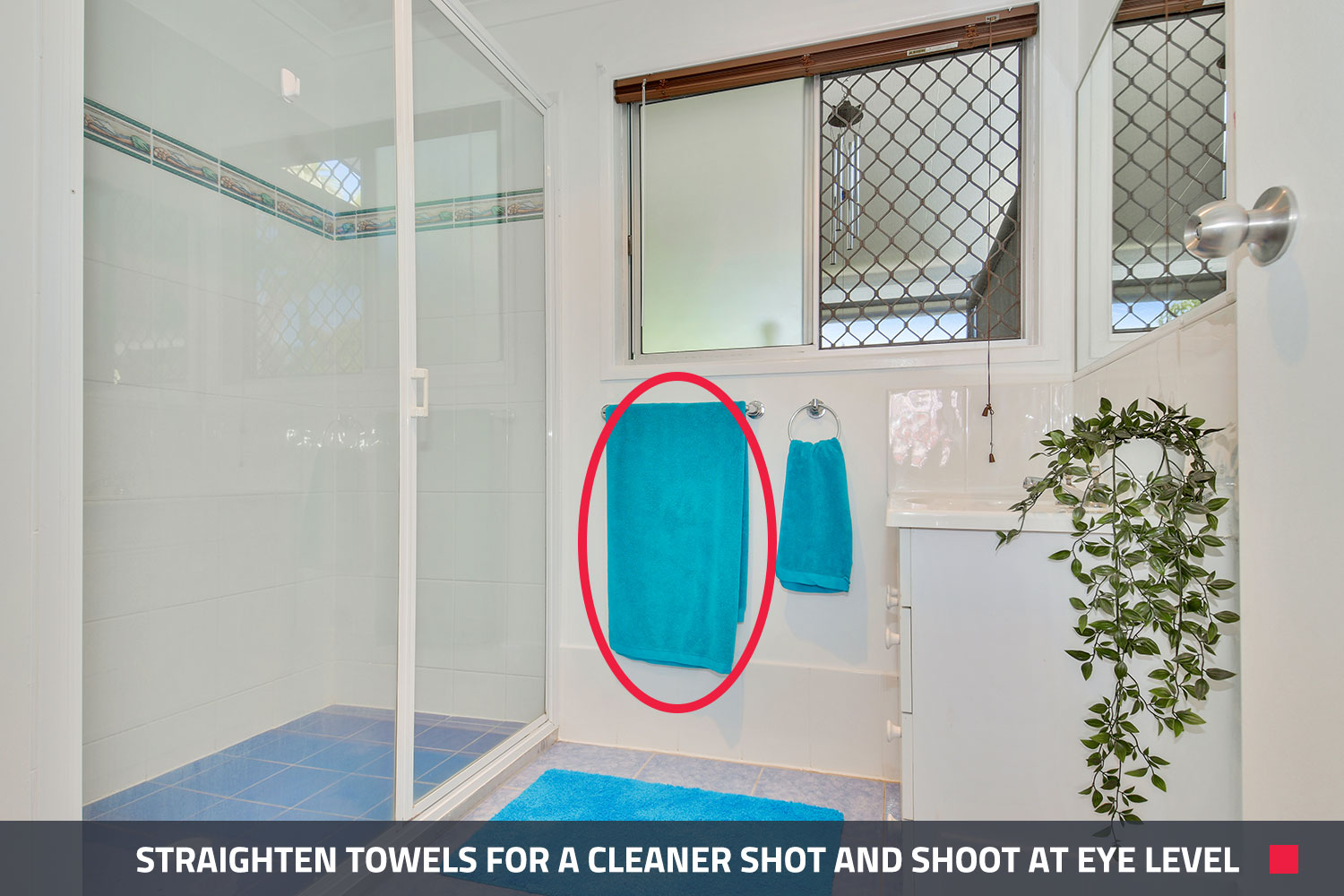 This is a great shot as there are no neighbours in sight however the photo is blurry which is never ideal as it’s something we cannot fix at BoxBrownie.com. Also, by standing a few steps back, more of the patio could have been included in the image which would add context for the potential buyer. 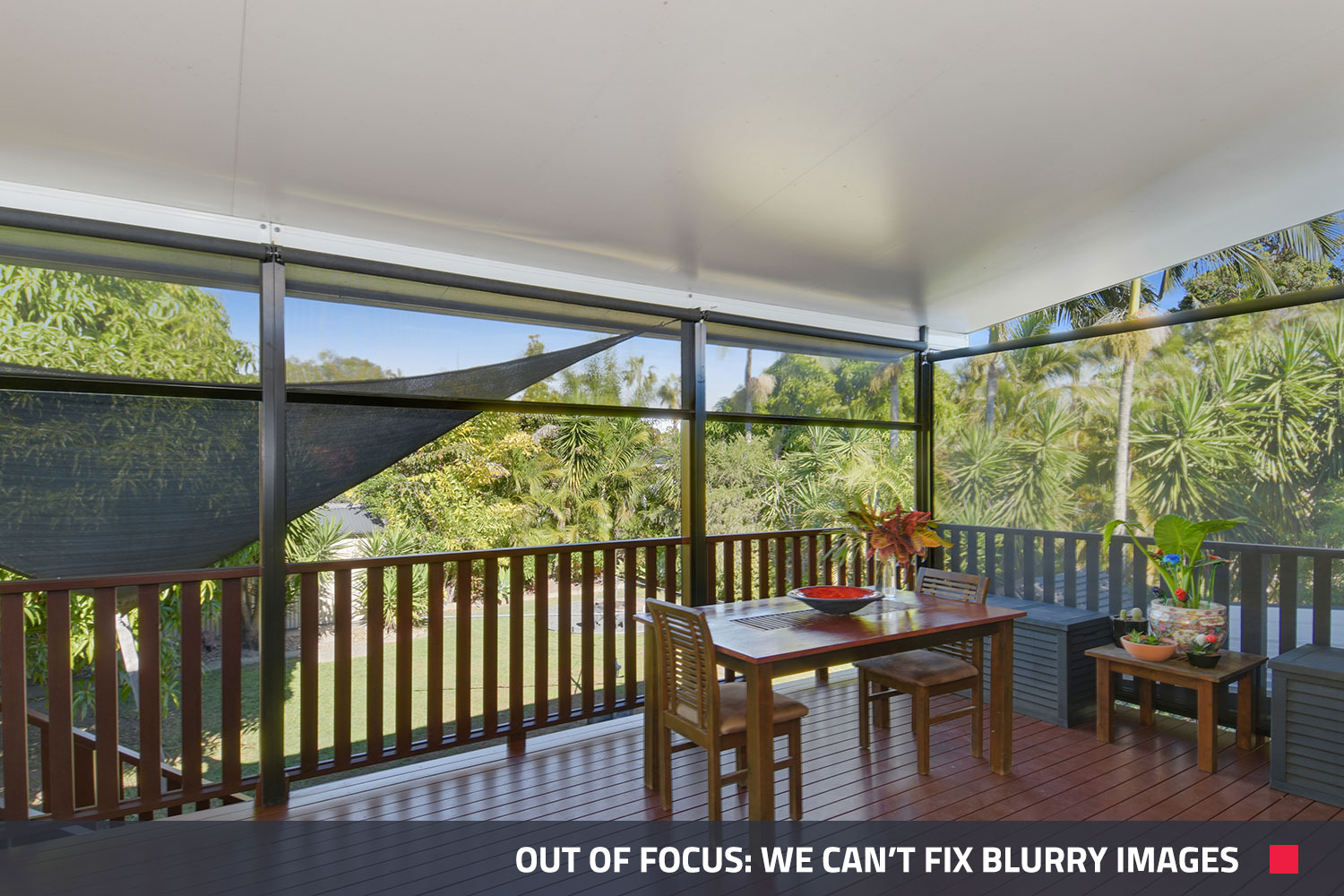 In this case, leaving the exercise equipment in the shot is okay as it is too heavy to move, but don’t forget to always keep those fans turned off. It’s always a good idea to open the sliding door and bring a sense of space to the room and, as always, we recommend bringing the blinds down just enough to hide the neighbours but still allow light in. 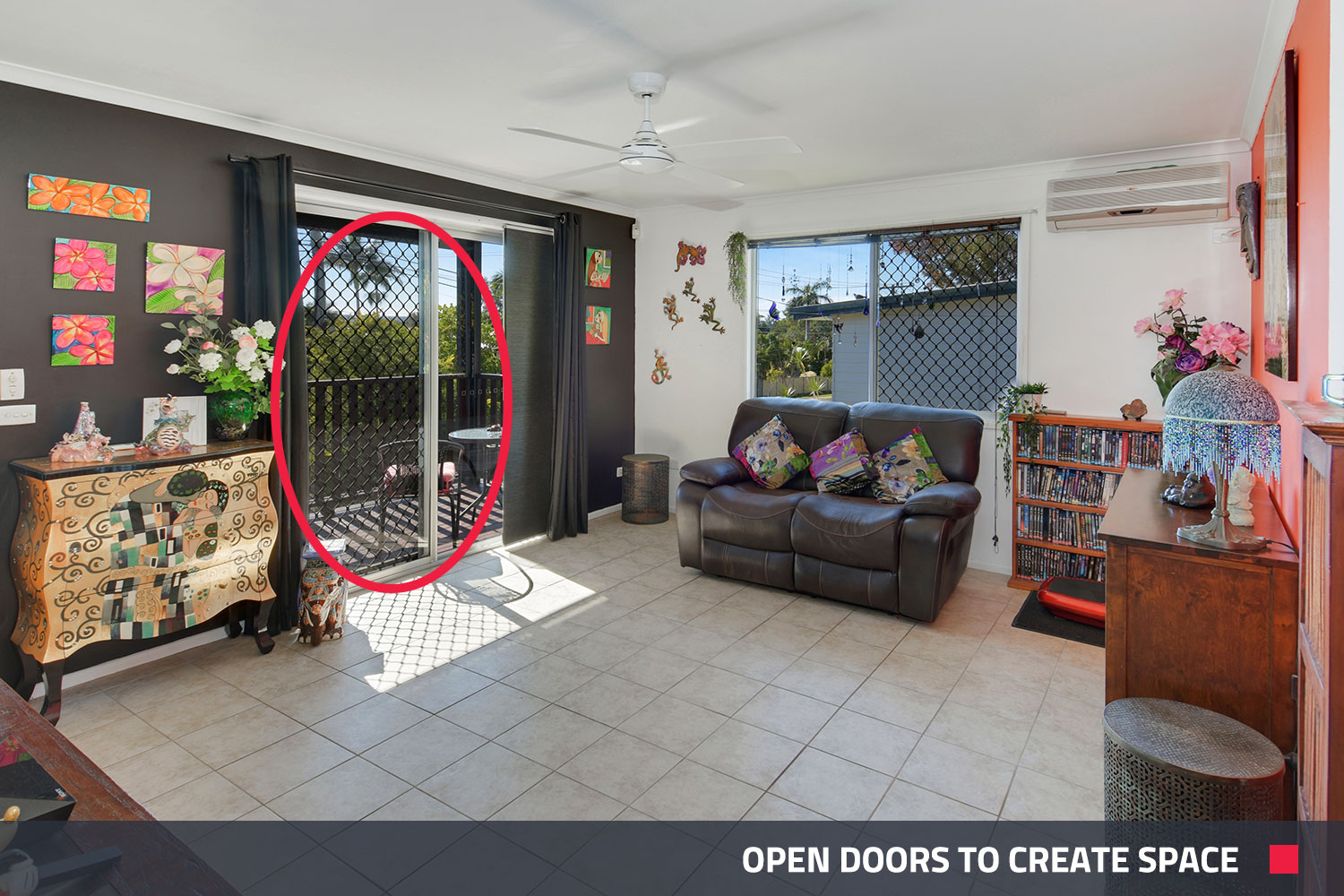 There’s no doubt, the kitchen is one of the most important rooms in the house to get right. By removing the food, chopping boards, paper and dish rack, a cleaner image could have been captured and these items could have been placed on the floor while shooting as it will be cut out of the image.

The cupboards are evenly closed which is really good to see and we are always a fan of fruit bowls which helps to improve the overall presentation. 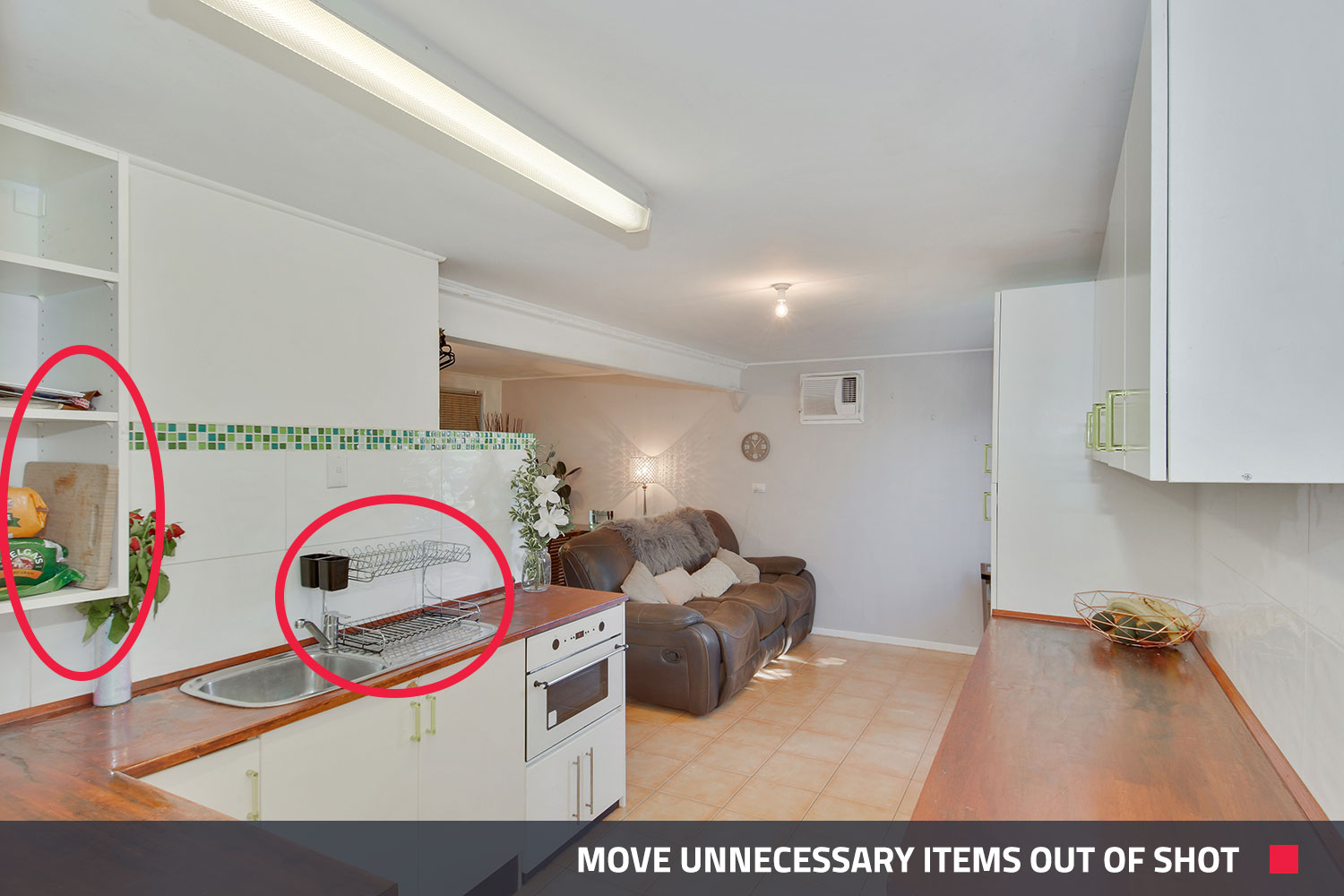 There’s not a whole lot that can be done here however we would suggest removing those items mentioned previously in the kitchen and also the mat sticking out from under the door. Also, by angling the shot further down, you could remove some of the ceiling for a more even floor-to-ceiling ratio.

The doors are open, which is great for bringing a sense of flow back into the property. 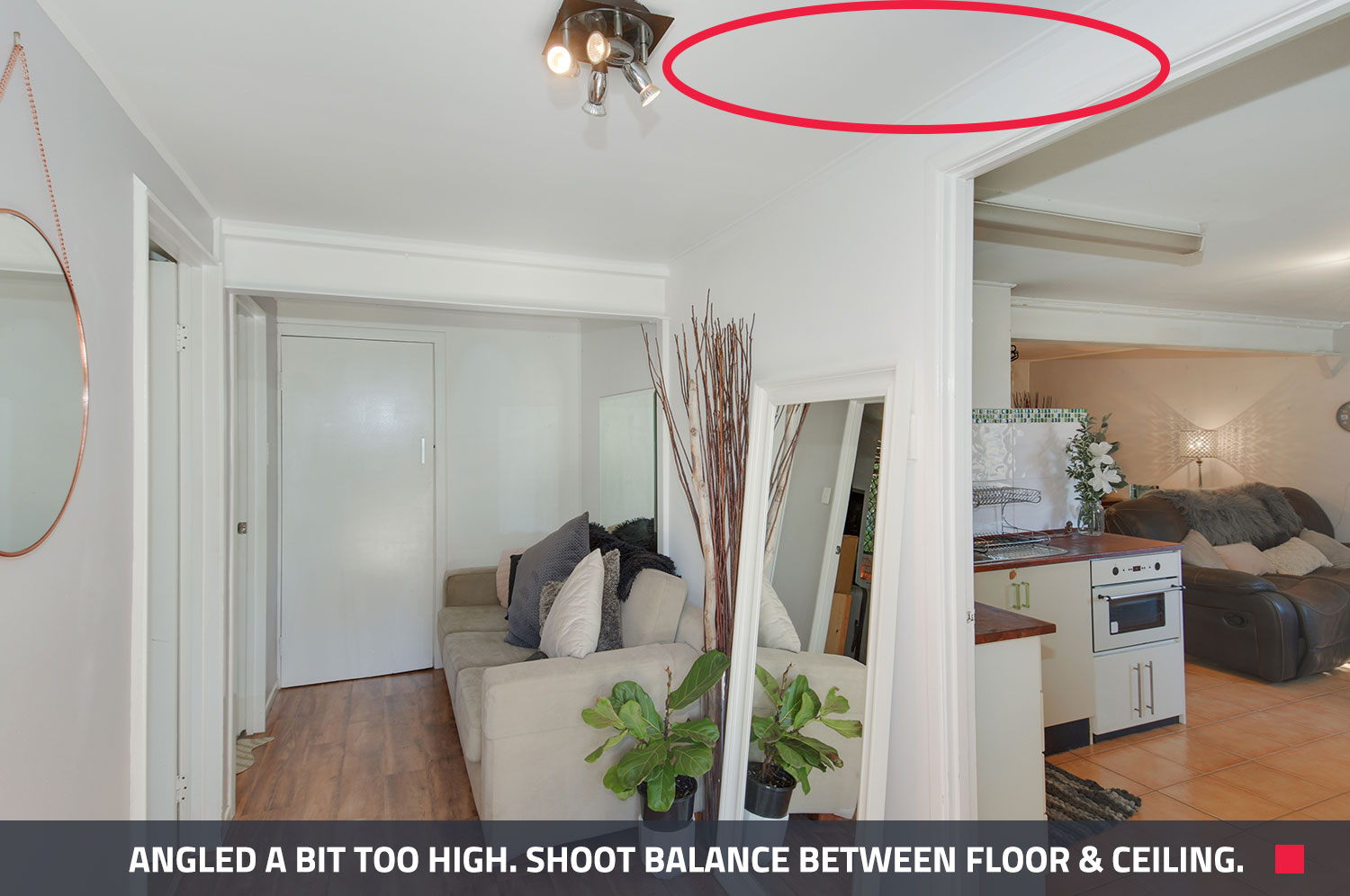 We would suggest creating an even space of the left and right side of the property to better frame the house and ensure the home is centred in the image. Unfortunately, the photographer has also not used their hand to block the sun which has resulted in sun flares. 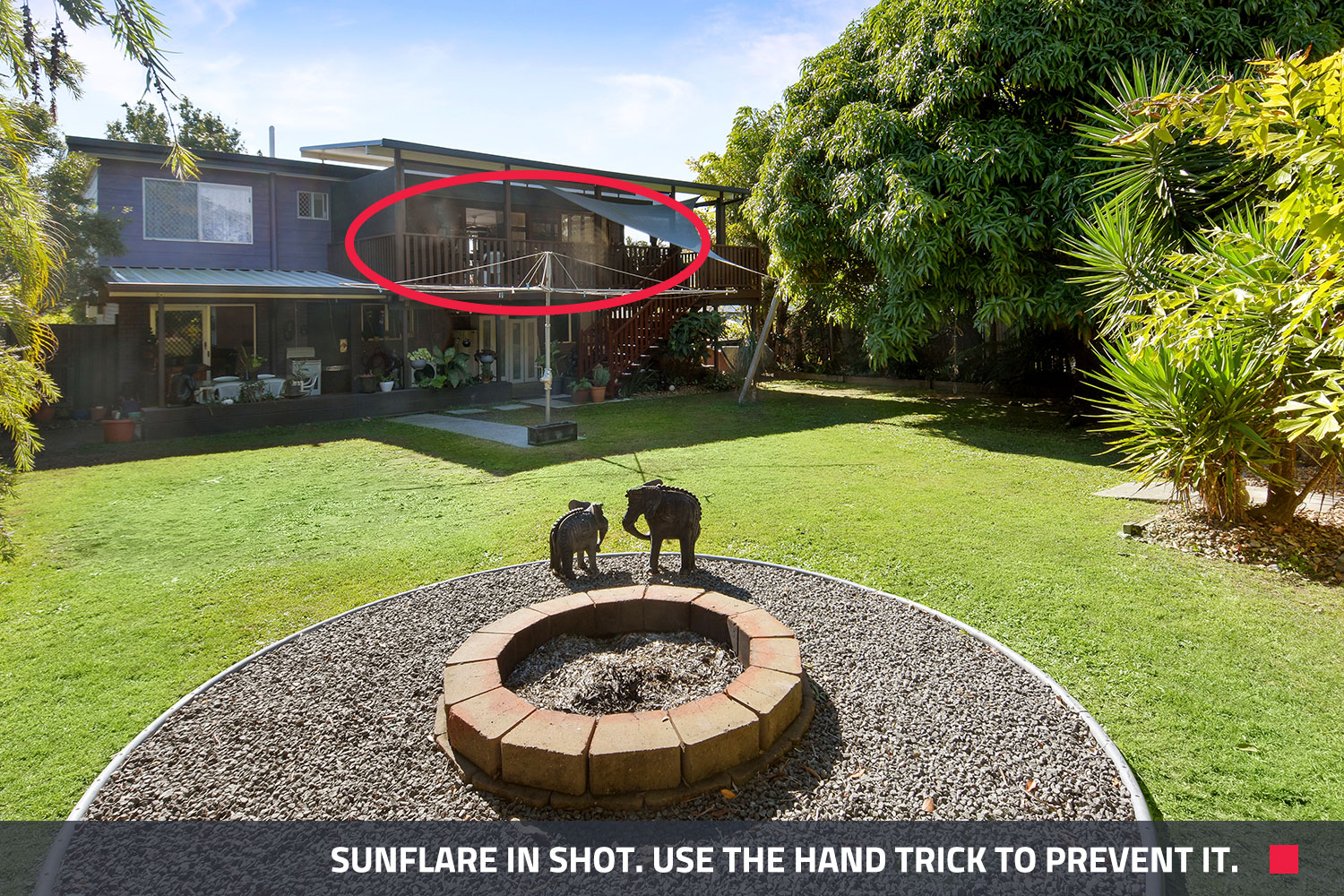 It’s great to see the shot has been taken with the servery window open; however, it could have been improved if the range hood light was turned on and the tissues were removed. If the photographer had taken the shot further back, the image would also appear less cropped.

In this case, it would be good to try and capture multiple spaces in one as we know the servery opens from the kitchen to the balcony. This would give the potential buyer more of an idea on how the space could be used. 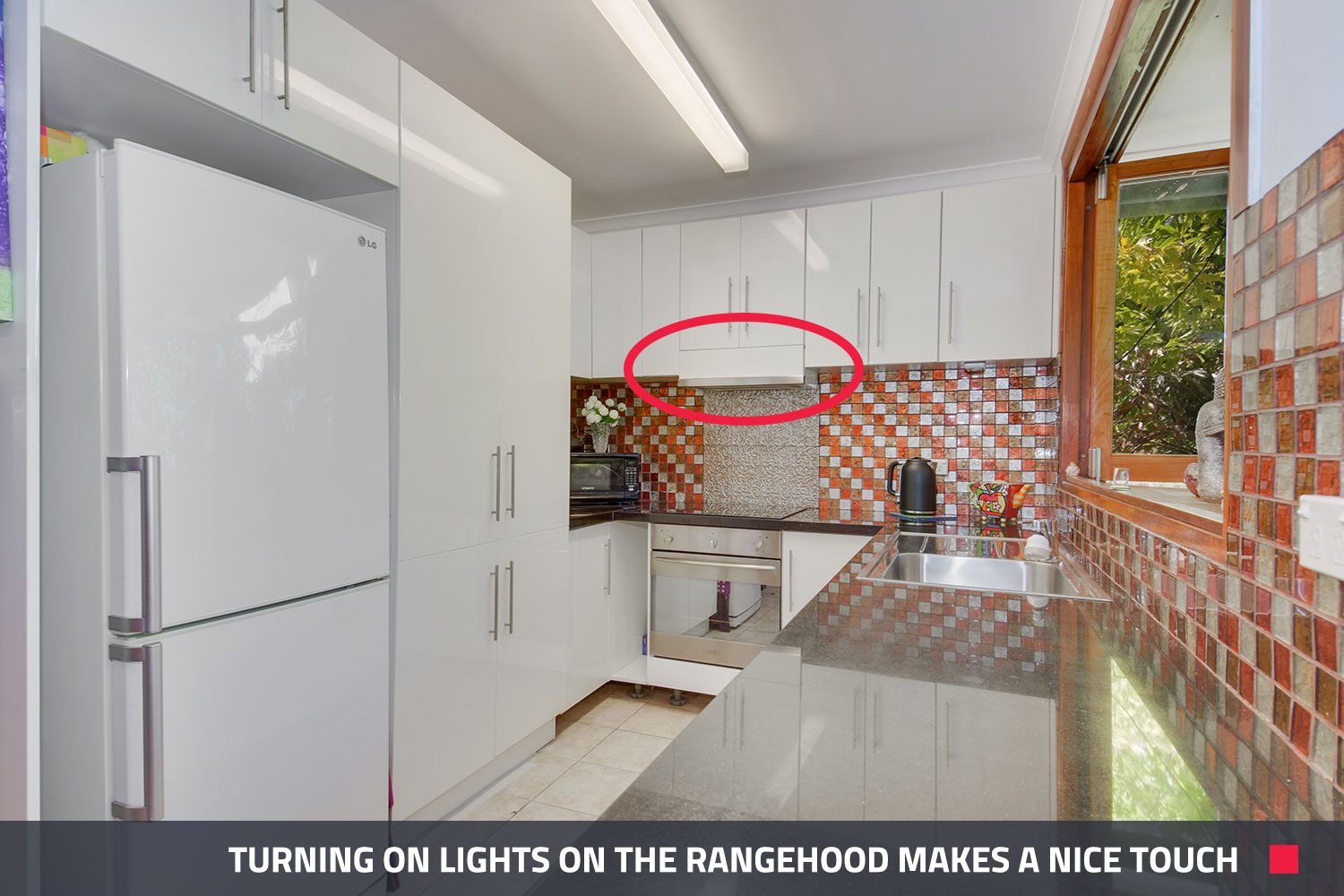 Throughout this blog, we have focused on our Image Enhancement and Item Removal products. If you’d like more information on these edits and to submit a job, follow the relevant link below.

HOW TO SHOOT REAL ESTATE USING AN IPHONE 12

We get asked all the time, should I be using an expensive DSLR camera to shoot real estate? With the incredible advancements in smartphone technology, we put the new iPhone 12 to the test and see if we can shoot professional real estate photography for less just USD $35. Let’s see if it can be done.

HOW TO TAKE PROFESSIONAL PHOTOS ON YOUR IPHONE OR ANDROID PHONE

Want to market your property like a professional but can’t find (or get access to) a good photographer? Or maybe you're looking for an innovative way to take real estate photos whilst saving a few dollars... Well, get excited cause today, we’re going to teach you how to shoot real estate like a professional using only your smartphone!

In this post, our resident photography expert Brad Filliponi cuts through the geek speak to determine which 360° camera shoots the best Virtual Tour - the Ricoh Theta Z1 or the newly released Ricoh Theta X.

HOW PROPERTY MANAGERS CAN MARKET A HOME FOR UNDER $20

If you think quality, professional real estate images aren’t in your budget – think again! For under $20 you can beautifully showcase a property that will boost listing inquiries and your brand. How? Just follow our how-to guide.

HOW TO SHOOT REAL ESTATE IN THE RAIN

You don't need to wait for ideal weather to shoot a property. Learn these simples tips for shooting in wet weather.

The success real estate agents experience in life after Covid will depend upon how they utilize information and embrace technology. The new reality has arrived, but it doesn’t mean that age-old wisdom no longer applies.