ON-SITE AND OVERSEAS: RENDER IT SOLD WITH CGI

Construction sites can be bleak landscapes. Whether they are vacant blocks of land or somewhere closer to completion, they can be unattractive and uninspiring atmospheres that make it hard for buyers to imagine what the building will look like when it’s complete.

Recently our own Peter Schravemade took journalist Mike Loder from Ticker Snaps on a tour of such a site.

The tour provided a great glimpse into the challenges of marketing unbuilt property. The number one challenge in such scenarios is always enabling prospective buyers to envision what the end result of construction will be.

Getting their boots dirty, with sawblades buzzing in the background, Peter and Mike gave the viewers a first-hand look at some of the ways that BoxBrownie.com is proving invaluable to builders, developers, and real estate agents who are seeking to sell unbuilt real estate off the plan.

Standing among building skeletons made with steel beams rather than wood, Peter pointed out how this was another indication of the lumber shortage that is contributing to the larger inventory crisis in the housing market today.

Because of such low inventory, off-plan sales have become crucial.

“What I’m seeing is that a lot [of people] in the building construction industry hadn’t put that together. They are really struggling to keep up because they’ve got a massive inventory crisis. They’ve sold everything that already exists.”

BoxBrownie.com is constantly innovating, and because of the current market situation, we’re continually coming up with better ways to market property that is yet to be built. Look what we’ve done to the standard floor plan, for example. We’ve taken what was traditionally little more than a 2D black and white sketch and really made it pop.

“Way back in the day when I started in real estate a floor plan and a real estate elevation was what you got,” Peter said. “But these days they have a range of things that they have available to them. The floor plans, they look amazing in high-quality 3D.” 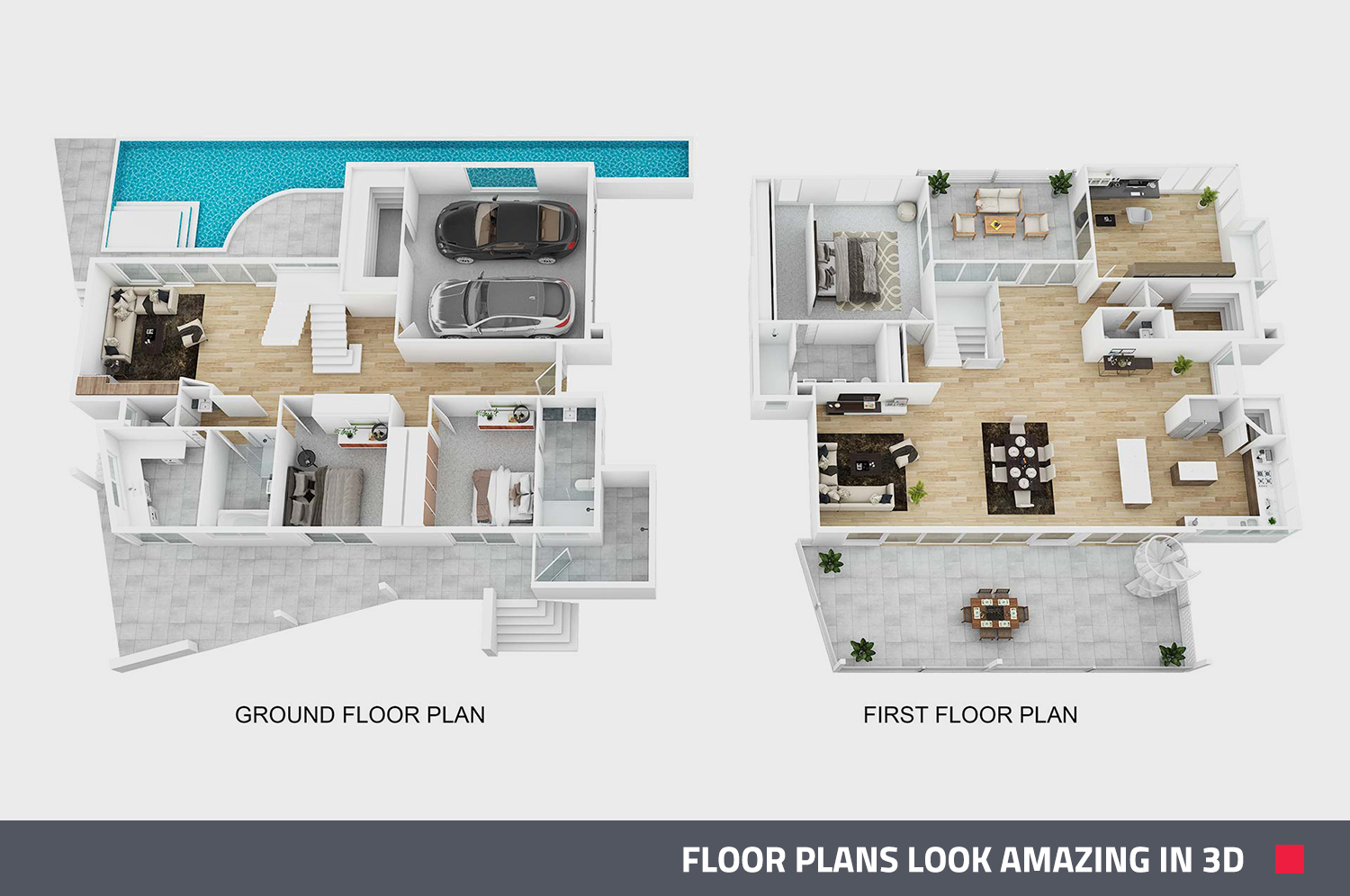 Perhaps not surprisingly, standing amid such steel-beamed works in progress, the conversation soon turned to the unparalleled power of the 3D render when marketing property where the building is not complete.

“A lot of the builders, developers, anyone in the construction industry - they are all dealing with blocks of land that are just vacant. And it’s really hard to show a purchaser what they are going to put on that block of land. Things like the renders, like the floor plans we’ve just spoken about … they are more important than ever.”

RENDERS: A BARE MINIMUM WHEN SELLING OFF PLAN

“Renders or CGIs…  I would say they are a bare minimum if you’re selling a house that doesn’t exist,” Peter explained.

“Eventually the purchaser, or a builder or a developer if you’re selling a massive project that doesn’t exist, somebody’s going to want to know what the outside is going to look like. So the best way to do that is a render or CGI.”

The main difference between a standard 360° Virtual Tour and a Render Virtual Tour is that the former consists of actual images, while the latter is made completely from computer-generated imagery - designed from the actual measurements and fixtures of a property to make it as accurate a depiction as possible.

“We create computer generated imagery using editors that are similar to the ones on Harry Potter or Star Wars. We create the computer-generated image, to spec, that will look like the property when it’s completed,” Schravemade said.

“And there are some cool things we can do with that. For example, the builder might have three selections of kitchen.

“We can drop in the different kitchens so the purchaser in real-time can just click between the sparkling white, or the beige all day, or the grey kitchen. They can choose between those three and have them subbed in and out.”

Usually at the forefront of any sort of marketing push, the United States seems to be lagging well behind Australia, New Zealand, and Scandinavia when it comes to marketing property off-plan.

For whatever reason, the 3D render remains a rarity in American real estate marketing. As Peter told the Ticker Snaps audience:

“In America, you’re quite often just going to see an elevation and a floor plan. An elevation being just a black and white drawing of what the architect has drawn up.”

Aside from the 2D elevation, the second most common form of marketing off-plan property in the USA seems to be via photographs of a home in some state of unfinished construction.

However, there are signs that this might be about to change.

CGI renders, though uncommon, do exist in American property marketing. In fact, those trailblazers who are working with us to market their unbuilt projects using 3D renders (or architectural visualisations) are seeing incredible results - both in consumer interest and in sales.

Furthermore, their marketing and use in social media are placing them so far above their competition that in some cases the gap is ridiculous.

A great example of this comes from a recent conversation Peter had with American maestro of marketing, Charles Nitschke.

Charles is CEO of marketing at Tomlinson Realty and has enjoyed great success using our image enhancement, virtual staging, external renders and our fully immersive 360° render tours to shoot far ahead of the competitors in his native Coeur D’Alene, Idaho.

In his chat with Peter, Charles presented three slides taken from Zillow, to indicate just how much of an advantage our render technology is giving him. When this kind of disparity becomes more widely acknowledged, the United States might be poised for a render revolution.

The first slide he showed was a black and white 2D elevation; the second, a photograph of an uncompleted home; the third, a 3D external render from us at BoxBrownie.com.

To keep things as even as possible, each slide featured an unbuilt home in Spokane, WA. Each was a Zillow listing with a comparable price point. There was no comparison, however, when it came to the marketing results among the three listings. 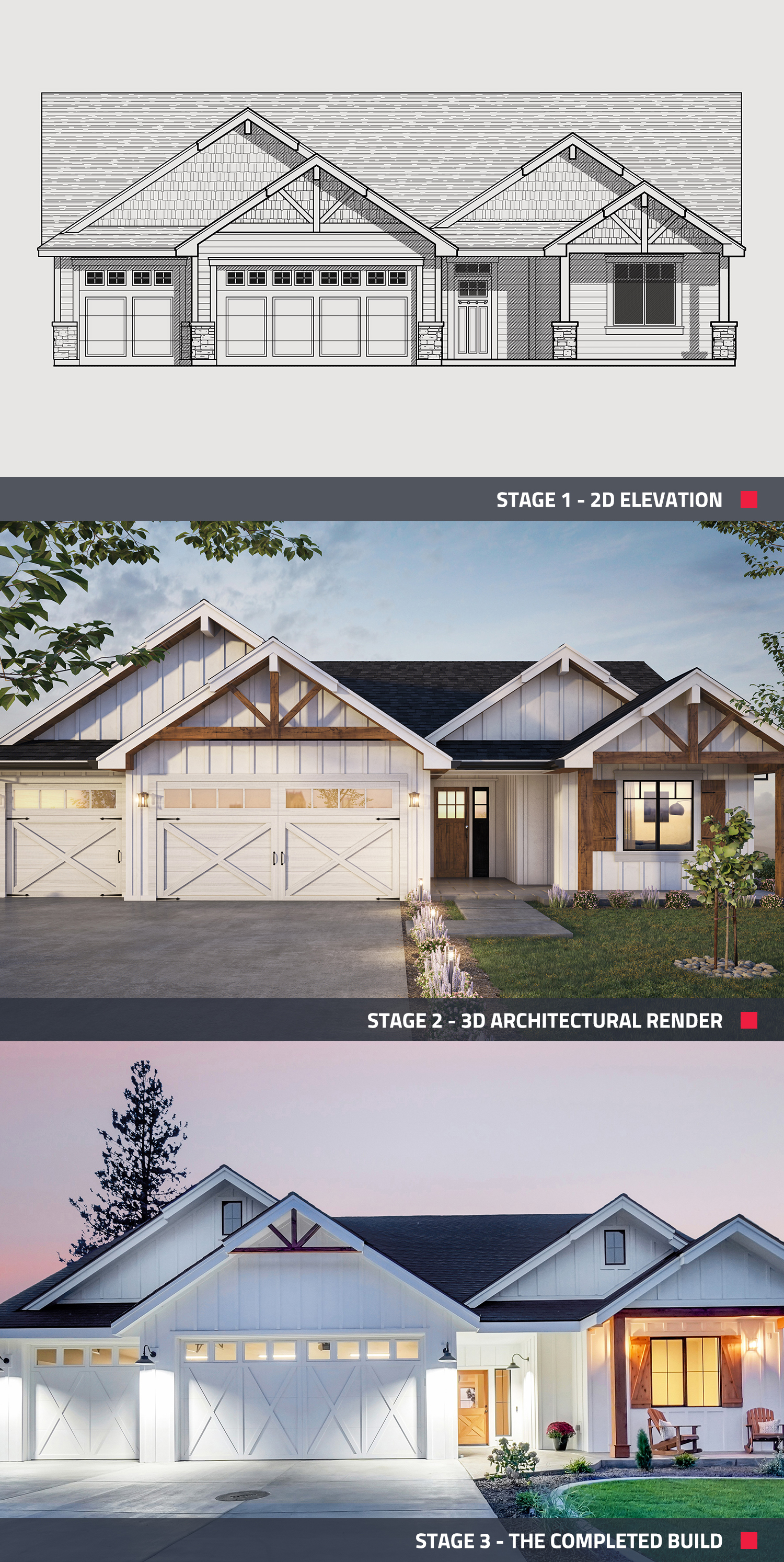 KEEP AN EYE ON THE OVERVIEW

Nitschke drew Peter’s attention to the ’overview’ category on each Zillow listing. This part of the page informs the viewer how many days the property has been on the market, how many views it has had and perhaps most importantly how many “saves” the listing has received.

Essentially, each save means that someone has been interested enough in the listing to register with Zillow and record that listing among their favourites. Generally, the save is reserved for serious property shoppers.

The numbers supply a compelling case for the value of the render. “Compelling” might even be an understatement.

The first two properties, which use the most common marketing practices for unbuilt property in the United States, had a combined 87 days on the market, 916 views and 12 saves.

Our BoxBrownie.com render was on the market for 27 days. It received 5,172 views and generated enough interest to be saved by 265 property browsers. 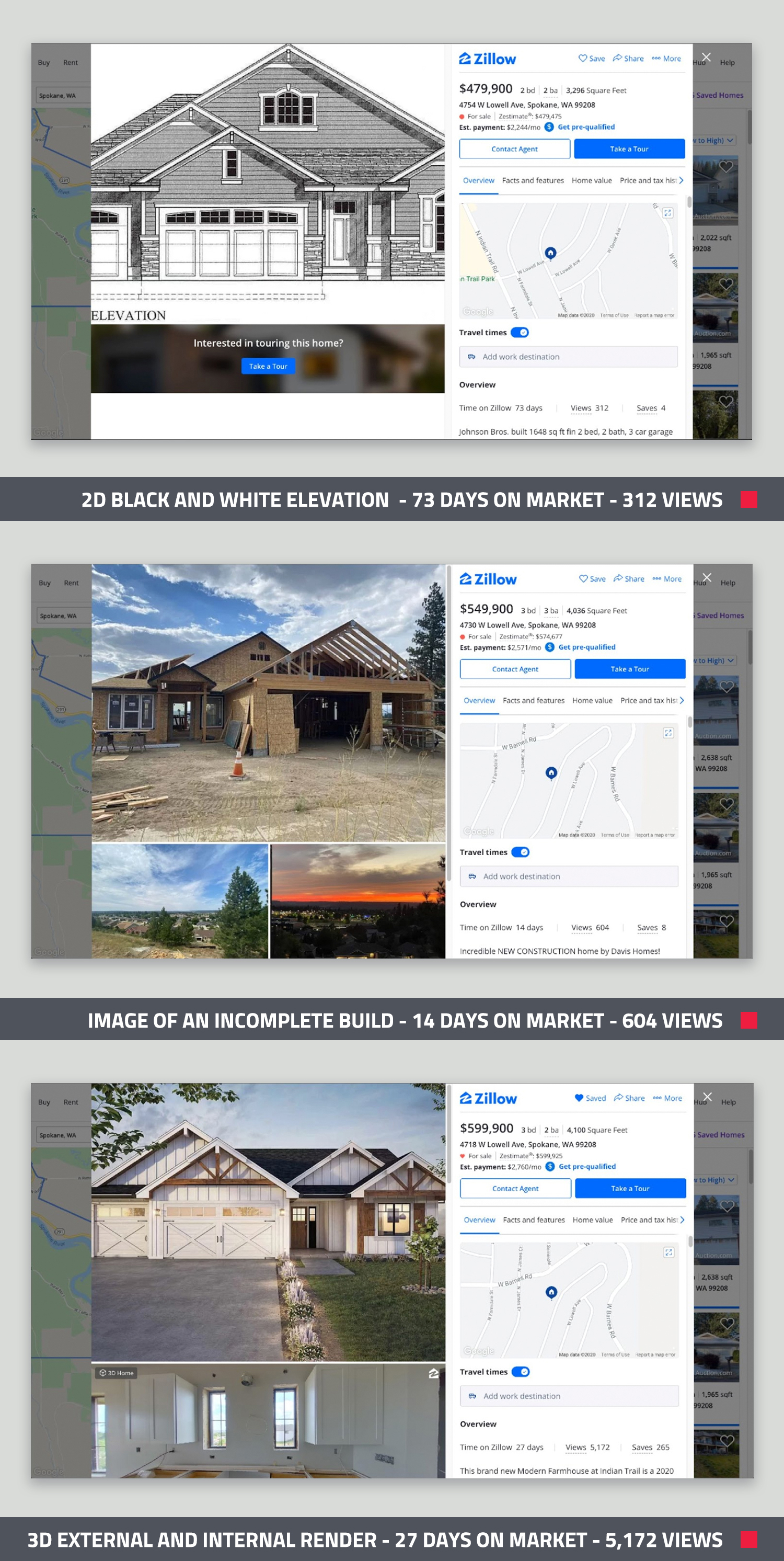 “This is how I measure whether or not we’ve hit the market when we go to market,” Charles told Peter.

Even Peter, who spends his life touting the essentiality of our renders to the construction industry, had trouble containing his amazement at just how far ahead of the pack our renders placed this Spokane seller.

Peter (from the video transcript):

“27 days on Zillow, 5,172 views, and 265 saves. That's exponentially just blowing it out of the water. And you're attributing that directly to marketing?”

“Absolutely. It's a product that people engage with, so I'm going to give part of the credit to the builder and his wife, she's the interior designer...

“You guys brought it to life in a way that we couldn't have done until we were done building the house. So within the first 48 hours that we were on the market, we were getting a save or two an hour.”

Renders might still be the best-kept secret for marketing property off the plan in the United States, but with numbers like these, they won’t be a secret for long.

5 STEPS TO DEVELOPING A POWERFUL MINDSET FOR REAL ESTATE SUCCESS

'Change your mind and the rest will follow' is much more than the chorus of a pop song. Many of the world's top real estate agents swear by these five steps to achieving a mindset of success.

WHY DO MOST REAL ESTATE AGENTS FAIL? AND HOW NOT TO BECOME A STATISTIC

Did you know that 87% of real estate agents fail within the first five years? In this post, we go over the top seven career pitfalls. After all, the first step towards avoiding them is to know what they are!

HOW TO USE SOCIAL MEDIA TO SUCCESSFULLY SELL REAL ESTATE

Social media is great for selling real estate. But each platform takes a different kind of mastery. Here's how to use Facebook, Instagram, Twitter (and others) to maximum advantage.

HOW TO SELL A PROPERTY THAT NEEDS A RENOVATION

Trying to sell a property with enormous potential but in desperate need of a renovation? In this blog we will show you just how effective, quick and easy it is to showcase your property vision using our Virtual Renovation edit, even when the home is in need of some tender love and care.

SELLING OFF THE PLAN? YOU’LL BE “RENDERED” SPEECHLESS BY THIS HACK…

Want to increase your chance of selling a property that’s in the construction or planning phase? Well, you’re in luck! In this article, you’ll learn more about what ‘Renders’ are, how they can captivate your prospects, appeal to them emotionally, plus how simple and affordable it is to get started.

Are you one of those agents who doesn't want to spend ALL their time working their social media? These 10 simple post ideas will help you get the max out of social media with a minimum amount of time and effort.